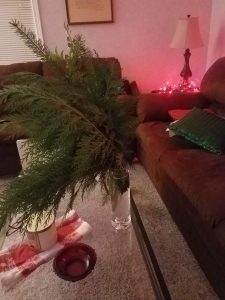 I have a friend in the house.

I didn’t realize it at first. Such a tiny thing he was. Not a reality exactly. On the periphery of my awareness. I watched him in my window for weeks out of the corner of my eye with absent interest. I was curious as to how he would make it. Inside? How would he get food? I debated his destruction a bit, but did not think his tenure would last. What was the point? He was harmless.

It wasn’t until I was about to spray my houseplants with soap and water in an effort to get rid of their tiny flies that I realized I had not only connected with my visitor, I had chosen a side. As I went for the soap, I stopped. I thought:

If I killed the flies, how would my new friend survive?

How does friendship start anyway? Like that? Absently and then with deliberate attention? I had invested emotions in him. Without meaning to at all. 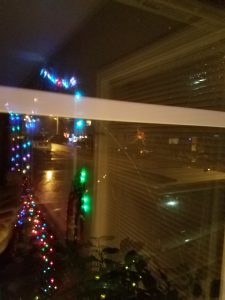 The spider I befriended was a teeny tiny dancer. A baby. So charming. So intriguing. Best of all, he always stayed in the window. He never sought me out, but tolerated my presence. We kept our distance, watching each other. We did not run. In the beginning, I couldn’t figure out how he caught anything. There seemed to be strings across the window frame, not a web. Maybe he was separated from his mother too soon and never learned how? He was just a helpless infant after all. Maybe some spiders are like that: Circus performers who send their lines haphazardly across the great divide. Tightrope walkers with gummy sticky shoes?

One day, lazily watching him dangle like a silk dancer, hanging from his rope with one leg, body upside down, the other seven legs akimbo, relaxed in the air, floating, beautiful, I found myself filled with sudden alarm:

He was getting bigger. 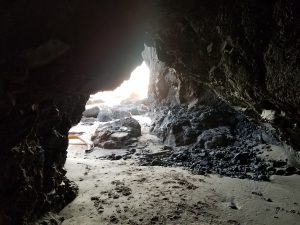 Why this abrupt panic? He was the same creature that he was as a baby. He wasn’t doing anything he hadn’t done before. If anything, he was more interesting.  But the truth is, if I had caught him in the house months ago at full size, running across my kitchen floor, I would have nailed him with a shoe, heart pounding. I might have had a moment of regret, but I would have swung that feeling under the rug. I would never have felt much compassion, never noticed his beauty, never thought that once he was an innocent darling abandoned by his parents alone in my home. I never would have known how beautifully my friend could swing across the clear sparkling panes.

Lately, I worry about him.

If I don’t see him dancing, meditating on his line, I twist my body into the corner alcove and look up to the top of the window, squinting, trying to see his legs curled up, too big to fit entirely into his sleeping place. I know now exactly where he hides, in the middle, high up inside the frame.  He always stays in the same geometric plane. If I raise the shade, he does not stir. If I lower it, there is no change. He only moves if he wants to. He knows I am there. Sometimes he comes out because he likes the day. And sometimes he only comes out at night. He is a moody little thing. 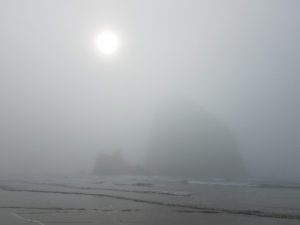 Haystack Rock in the Fog

Last night he built something. I’d never seen him do that. A thick awkward bed in the middle of one of the panes. Maybe he was finally going for it? Trying a proper web at last? Without training? Experimenting like a toddler does with water colors? He rested there on his creation a long time. Then for the first time ever, I startled him.  When I reached for the blinds and said goodnight as usual, he snapped up to the top and disappeared. Leaving the painting behind. In the morning it was gone. Why? Was the artist shy? Did he destroy it in the night? Or eat off it like a plate? And wipe his face with the silken remnants?

What makes us decide who we let in and who we push out? What we kill and what we keep? Sometimes in life we have to choose between the hummingbird feeder and the neighborhood cat. Sometimes between the butterfly and the spider. And often a foe who was a friend becomes a foe and then a stranger once again.  During the pandemic I have been writing a screenplay about a circus performer. Maybe that’s why the spider touched my heart, moved my compassion, my motherly instinct to protect? Or soldierly instinct to guard? Maybe it’s because I’m alone. Maybe it’s because he’s always there.  He trusts me. I watch him close, especially when he does his dangle dance. He knows I won’t kill him. Or does he? 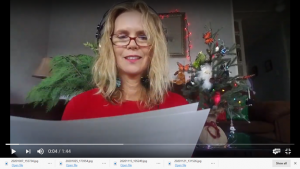 In this time of quarantine, I’ve had several odd tussles with people. Some with great friends of long standing. Fights without good explanation. Forgiveness without apologies. Rudeness without awareness. Fury over my giving what I have always given and taking what I have always taken. Nothing new there except the sudden rage. It flares, it goes. Sometimes it stays.  It is so easy to decide someone is an enemy. It is so easy to trust someone and then for ancient primal emotion to rise out of the depths to create havoc. Every friend so far has swung back round again, like a trapeze performer there ready to catch my hands again. I have had to choose over and over whether to trust again: Let the friend fall or fall myself, refusing to take the offered hands. Knowing in the next moment, in this climate of fear they might be slapped down again. 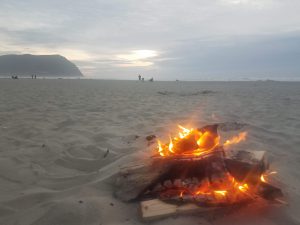 So I breathe when I see my hearty, healthy growing friend who keeps my plants clear from the tiny flies, doing what he has always done. That is to say, my friend

who now has a shape. Sections. Parts. He is fat and lovely and scary now. I remind myself that we are allies. I must tolerate the changes he is making so that I won’t be startled into killing him. And at the same time, every morning I check for his safety filled with a different fear, a sad dread that I will find my friend dead at the bottom of the frame.  Who could bear such loneliness? Yet he and I are both alone. And both will die. The beauty is we live now. And when we die, we don’t go alone: We have our beautiful orb-like selves. We get to take those selves on the journey. Across the silken ropes. Swinging over the frame. Into the sparkling glass-filled abyss.

And up into the sizzling starlight.

This entry was posted in All. Bookmark the permalink.