Rubber Bullets and the Cats of Gili Meno 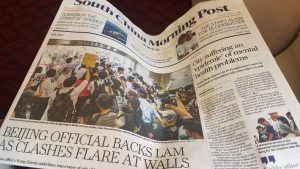 This was the voice of my Hong Kong tour guide on the phone last summer giving me advice on whether I should go on a walking tour smack in the middle of the government protests. 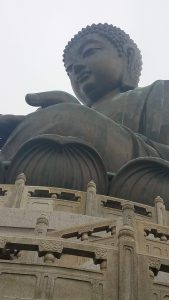 The Big Buddha on Lantau

Don’t get me wrong, I didn’t book the trip with that in mind. At the time I shelled out my cash for the ticket, there weren’t any citizens in the city square. No government buildings had been stormed. But since that time, the anniversaries of Tiananmen Square, the founding of Communist China and the new Extradition Bill had triggered a strong reaction from the residents. It was a reminder that according to the current governmental agreement,  in 28 years Hong Kong would likely be part of Communist China. Soon life in Hong Kong would never be the same again. Cameras would be installed everywhere. The official language would be changed.

“You will be all right,” my tour guide continued on the phone as I hesitated. “The protestors will not hurt Americans. They want the tourists to see what is happening.” 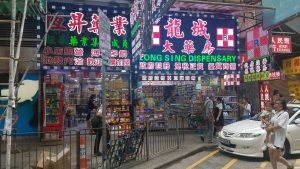 The Streets of Kowloon

His words tempted me. What if I decided to go and witness the mayhem first hand? After all, how many people can say they were in the middle of a historic moment in a strange land? You’ve got to wonder. If the people in Asia don’t fear tear gas, rubber bullets and bodies falling from the sky, what in the world do they fear? 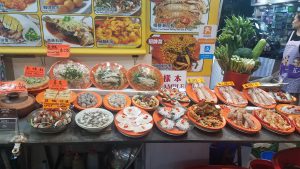 In the end I did not have to make a decision. Due to fog in San Francisco, I missed my plane and flew in too late for the walking tour. Even then I had to fight to get my money back. But it did not matter. I loved Hong Kong. I stayed on the peninsula of Kowloon which reminded me of Manhattan with its tangle of streets and the weather. First it would be hot, and then it would pour down rain. At my hotel, staff members always opened the front doors for me as if I were the star of a Broadway show making an entrance. 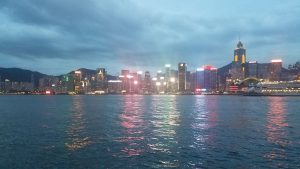 On my last night, I decided to take the Star Ferry sunset cruise on Victoria Harbor to watch the laser light show on the buildings of Hong Kong.  Below deck, I was sitting alone at a big empty table, peacefully nibbling oolong tea cookies and drinking a weird tasting lime soda when an Asian boy of about age 10 approached. He asked if he and his friends could sit with me. When I said “Yes,” his face lit up. He and the three other children he was with pounced on me with delight. They practiced their broken English with enthusiasm and forgave my non-existent Chinese. They brought me extra treats from the concessions, possibly purchased with pure charm. 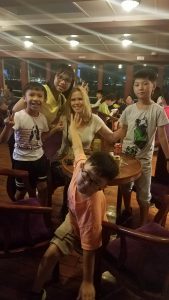 Us on the Star Ferry

As I tasted the jasmine tea cookies they had brought me and the Coca Cola they placed before me with great reverence, I wondered where on earth their parents were. When I asked, they pointed at a couple of women sitting at another table, one of whom seemed to be an “aunt”. As I waved at the women, they looked up, smiled briefly and went back to their own conversation. I was a little thrown that they did not try to engage me in talk, but odder still, when I got up and the children followed me outside onto the deck, they did not even look up. There was only a rail between us and the dark water. The children and I laughed and took pictures and chatted up the crowd of strangers on deck while I worried about them going overboard. It was a long time before I realized that one of the people in the crowd was the father to one of the children. Then I realized another was father to two of the other ones. The children were safe. It’s just that the parents were being unobtrusive and letting their children have their own experience.  With me. No fear.  What could possibly be next? 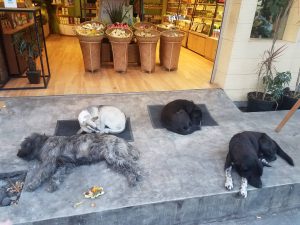 The dogs of Bali. Bali was the next destination on my agenda. It was beautiful and lush. Hindu culture was everywhere, just as Buddhist culture had been in Hong Kong. The traffic was wild. And the dogs. Oh, the dogs. In Indonesia there is no leash law. The dogs of Bali roamed free. They lounged on the sidewalks and didn’t move when I passed. They slept on busy streets and dozens of trucks and cars and motorcycles would pause to wait for them to notice them and slowly amble out of traffic. They made me nervous but you’ve got to wonder: First the protestors were not afraid, then the children, the parents and now the dogs of Bali. 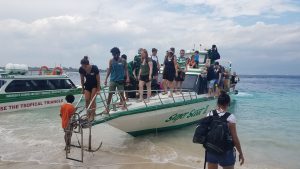 But it was time to move on. As I walked into the sea and climbed aboard a small speedboat in my bare feet, clutching my suitcase on my way to my next stop on the Gili Islands, I could not imagine what I would find there. 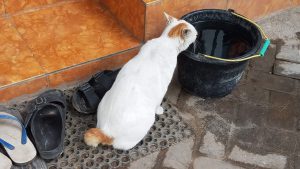 The Cats of the Gil Islands

Ever heard the term, “fraidy cat”? Ever met a cat that wasn’t? Every cat in the Gili Islands was like that. Not afraid. Seriously. I met not one cat who ran from me. In fact, they were so flirty that if I made eye contact they would follow me anywhere. The Gilis are so small that there are no motorized vehicles allowed and the islands are Muslim so there were no dogs at all on the Gilis. Only cats. Funny cats. Silly cats. Inbred with funny stumpy tails. Ownerless and casual, these cats are loving, friendly, sweet and amorous. Unfortunately, I had to avoid petting them because rabies is present in Indonesia along with the bad water. 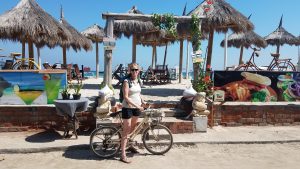 My bike and me on Gili T.

Bali and the Gili Islands are impoverished places. The paradise of the coast is offset by the shacks of the interior island dwellings easy to witness when I went on my bike rides through the center of Gili Meno, my favorite island. Gili Trawangan was so small I could bike around it in 45 minutes but I could walk around Gili Meno in the same amount of time. Yet it is so safe that when I rented my bike on Gili M. ($3 for 24 hours) and asked about a lock, the rental person looked at me with confusion and incredulity. “No one will take your bike on Gili Meno,” he scoffed. “Maybe in Gili T.,” he added with indignation, “but not on Gili M.” He was right. 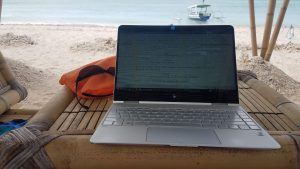 Gili Meno was tranquil. It was my favorite place in Indonesia. I spent my morning hours writing a screenplay on an outdoor patio after breakfast and my afternoons snorkeling with sea turtles. Huge ones, almost as big as my body. It was like swimming with dinosaurs. Each evening I would stand on the porch of my beach hut overlooking the ocean and turn slightly to the left to watch the sunset. The next morning I would stand in the same place and turn slightly to the right to watch the sunrise. The island was that small. It was hard to leave. In fact, I extended my stay on Gili 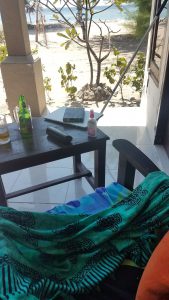 Meno three times before reluctantly walking barefoot into the sea again to return on my speedboat to the city. I enjoyed the tourism in the busy town of Ubud which was my next stop, but on Gili Meno I had found peace and freedom.

There on Gili Meno it was I who had no fear.

When I returned to the states it was quite a shock. There was an immediate stark difference which shook me to my core. After all, I had been gone almost a month. That’s long enough to get used to the rhythms of another culture. Here is the first thing I noticed on my return to America:

Everyone and everything is terrified. 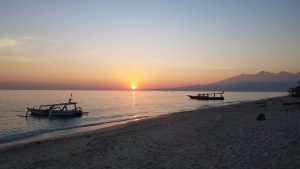 Once back in Portland, dogs behind fences in opulent neighborhoods growled and barked as I passed. Cats ran from me. Children hid behind their parents’ skirts. Parents stopped me from talking to their children even if the children spoke to me first. And I could not hold onto my peace. After all, fear is infectious. No wonder it is so hard to make friends in America. What is going on here? Are we that isolationist? That afraid? Could America possibly be more dangerous than Asia with its strict laws and swift punishments? It certainly felt like it. After all, the Clackamas Mall, Rogue River Community College and the Sandy Hook shootings were all near misses for me in one way or another. So was 9/11. But these things don’t happen that often. Statistically, most of the time in America we are quite safe. 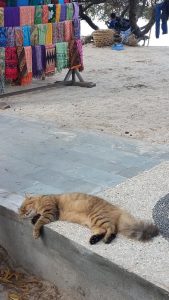 My thought about that feeling is that maybe it is our freedom in America that makes us so uneasy. We watch a lot of crime shows and think that’s around every corner. We see protestors and worry they will change our world. There is anger and hatred like I have never seen before as people watch programming or join groups which encourage vitriol against one side or another. A side that I believe is invented. Is it the fear of the other which has always kept us in our small groups and our homes? Where we don’t learn and don’t grow. Where we don’t experience the other? And now because we are in the middle of a quarantine due to the Covid-19 pandemic, we are all in middle of a historic moment in a strange land. We can’t visit the other. And I didn’t need to go on a Hong Kong walking tour to get hit by a rubber bullet in order to make history. This time it isn’t even other people who are the adversary. We are trapped alone in the middle of a global war started by an enemy which has no personal malice. 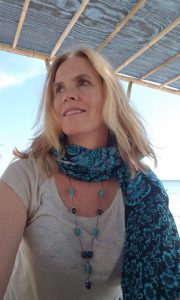 Me in Gili Meno

I wonder, is there a way to have both freedom and freedom from fear?

But I want to be like the cats of Gili Meno.

This entry was posted in Places, Writing and tagged all, anxiety. Bookmark the permalink.

3 Responses to Rubber Bullets and the Cats of Gili Meno