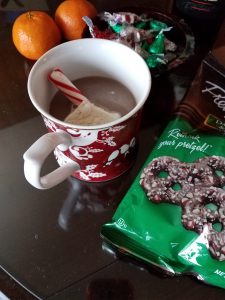 This morning I woke up out of breath.

It’s a usual thing…maybe it’s allergies, maybe I have emphysema.

These are the kinds of crazy thoughts I have.  Every day.

Thanksgiving and Christmas morning when you are by yourself can be difficult.

When I was a young artist living in New York it was a little different. There were lots of single, displaced career-minded actors without significant others. At Christmastime my Oregon friend Michael and I went out for Chinese food and then we would go to the movies. Sometimes we saw two. One of my favorite Thanksgivings was one I spent with my friend Jed, who is from Germany by way of Denmark. He bought a big chunk of pre-cooked turkey and I made Stovetop and sweet potatoes without any unhealthy toppings. At the party, we strung cranberries and popcorn for his Christmas tree and toasted each other with blackberry Manischewitz. 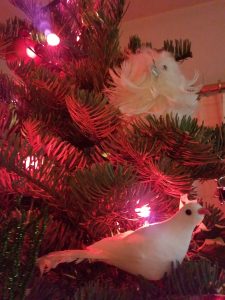 This is not the same thing as being an orphan at someone else’s party.  Last year at Christmastime in Portland, I realized that I had been attending other people’s rituals for quite some time.  So during the month of December, I began to create my own instead. I went to plays and concerts both by myself and with friends. I dressed the tree in red lights and put imitation birds on them like my mother did when I was small. On Christmas Eve I went to a high holiday candlelight service and when I got home, I made a trail of chocolate kisses and Hershey’s miniatures from my bedroom to the stocking under the tree the way my sister did when her children were young. In the morning I lit candles and put on the Hallmark Station’s Yule Log. I had already stuffed the things I had bought for myself earlier that month (things I needed which I was already using) into gift bags with tissue paper. When I woke up I cut open one of the Christmas cakes I had made the day before and toasted the morning with hot cocoa. Then I stuck the rest of the cake into the freezer. 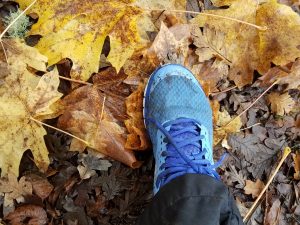 Thanksgiving is not quite the same as Christmas. It’s a big social event which revolves around food preparation.  Even though I haven’t been feeling very social or brave lately, I determined to seek out a solitary adventure. Ha.  It didn’t take long to find out nothing was open. Not the ice skating rink, the community center or the museum. (Okay, the zoo was open but somehow that sounded cold and wet and lonely.)  What I did find that intrigued me was the West Linn Turkey Trot, a benefit for the local food bank. It’s an annual three mile run through a park filled with trees. By a river. Gorgeous. And very wet. I put on my rain coat and headed down the road to the sloshy parking lot. 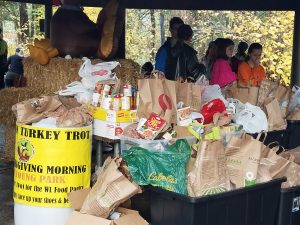 As a solitary attendee, I had forgotten that when you go to events like this on your own, other people will talk to you. Especially if you talk to them. My shyness dissipated when I met the congenial Chris and Liz (from Texas), two cute policemen (from Oregon City), several sexy fire fighters (from Tualatin) and a bunch of flirty babies in backpacks. There were also about twenty galloping dogs and dozens of quick small children in running shoes. There were bottles of donated water and satsumas and Costco trail mix, a big digital clock so you could track your time and a little girl who sang the national anthem a capella. There were also lots of strollers and a whole lot of mud.

It was a blast. 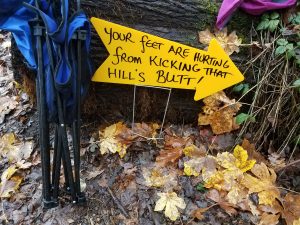 Because of my breathiness this morning (the mugginess? ambient cat hair? nerves?), I thought that I would probably just walk and not run. But the exuberant planners had put up many handwritten signs of encouragement along the way including ones hanging overhead from the trees to jump up and “high five” which said things like, “You’re nearly there!”. A photo of a bikinied man from the television show Baywatch declared, “You have worked your Hassel hoff!” and another stated, “You’re doing so well that if you were in a documentary, Morgan Freeman would be narrating it!”  Caution tape kept us all from straying off the proscribed path. I realized suddenly that all of these messages were symbolic of how to live a good life.

Despite my derelict lung capacity, I ran nearly the entire three miles.  Afterward, I went home to get ready to go be a Thanksgiving orphan at someone else’s party. It’s not such a bad thing. After all, this way I don’t have to host the whole event myself. Right now I am now at home making deviled eggs and I’ve already laid out the Bailey’s on the counter.  I’m watching the Macy’s Thanksgiving Parade live on YouTube. It’s a parade with a tradition which has special meaning to me because I used to go to watch it in person when I lived in New York. 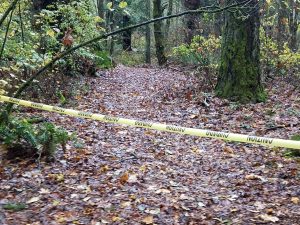 The best thing about all of these explorations is that I now have some rituals I can share with friends…or with that special someone else whenever he comes my way.

But it also doesn’t matter. These are things I enjoy which I can do on my own.

And just knowing that is enough to make me breathe easier.

This entry was posted in Acting, New York Stories, Self Identity and tagged all, Oregon. Bookmark the permalink.