The Art of the Day Job 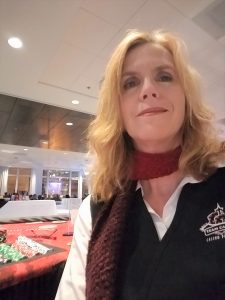 A couple of years ago when I was working as a featured actor on a commercial, a couple of extras waiting to go on asked me if performing was all I did. I thought about this. The answer at that moment was “yes” so I said that and their estimation of me clearly went up. It was obvious that in their minds this meant I had “made it” as a performing artist.

No one asked my reasons for “yes.”  Among them, I wasn’t teaching a college class that particular semester and I was on unemployment. I also had other resources and some money saved. These were the things that made it possible for me to be free to drive up to Washington at 2:00 p.m. on a Wednesday and be my best self in front of a camera.

We know the world needs temps and waiters and subs and baristas and bus tour guides and dealers working parties at Team Casino.  I have done all of these things and so have many of my friends. But are these jobs less important than other ones? Some jobs are more desirable, yes. But more important? Is being free to do what we want always a better use of our time than having a “day job”?  I would argue the opposite. How can we connect to people in the world who are working at other kinds of jobs than we are if we never do the same? Being an actor or writer means you must be a good observer of life. I would argue that if you can squeeze a day job in between your performance gigs you will become a better artist. 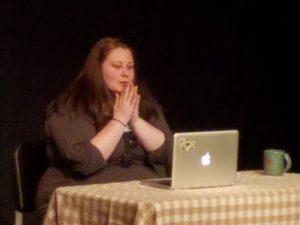 My heroine played by Lexie Quandt in my short play “Heaven on Fire” at the Hipbone Studio. Directed by Julie Akers

After a flurry of recent projects which included directing  Almost, Maine at Portland Community College and writing two short plays which were produced at the PDX Playwrights Daisy/Crazy Dukes Festival in January, I once again found myself with a little down time. This time I decided to try substitute teaching in the public schools.* Right now there is a great need all over the state of Oregon for subs so in addition to the perks of flexibility and a $20+/hour paycheck, I knew I would be helping my neighborhood and my community. Never have I had so many thank yous as I have had in the past six weeks just entering and leaving a building.  However, I didn’t expect it to be fun and it wasn’t.

Gary Corbin and Lauren Emery in my short play “The Egg” which I wrote and directed in 48 hours. Hipbone Studio, Portland, OR

My first month of subbing was fraught with exhaustion, students who challenged me every day and even danger. At one middle school where the rules on the wall declared, “Leave your smart phones in your locker” a disobedient 13-year old defied me. You would have thought I’d asked the student to hand over an arm instead of a tiny computer. Before I could walk the contraband down to the office, the kid got two buddies and cornered me in an empty classroom. The next time I stuck to 11-year olds, thinking younger children would be safer. Wrong. The instant I turned my back, one of them threw a pair of scissors at another student.

Every time I sub I learn something about the human condition. Children aren’t really that much different in their temperament and concerns than we adults.  Kindergartners are a bunch of insecure gossips and tattletales who cry because “Billy was playing with Joe and not with me!” and most complaints like that come from the boys as well as half the tears.  It is an awakening to have the privilege of seeing boys at the stage of their development before they told to “shut up” by society and forced to pretend they are not just as emotional as girls. It is also nice to see the respect girls are given in school before they have to go out in the world and fight for it. Their confidence in themselves in that protected space reminds me that it is possible to be brave and bold even when the “real world” tries to tell me there is something wrong with me instead of something wrong with it. 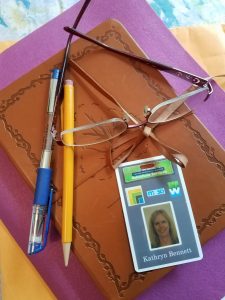 It is impossible to prevent people from having opinions about what we should or shouldn’t do. But the artist must be strong. Just know that the ills of the world do not reside in you if you do not participate in them.  The most difficult thing about this is letting go of the illusion that we have control. We get the idea that if we just shaped ourselves into somebody else’s vision of what we should be then we would fit into the world and everything would fall into place.

We can’t. It wouldn’t. And we shouldn’t.  But we can create art about it.

And art can change the world.

* It is possible to sub in Oregon without a teaching credential but since I had an expired one I did the renewal work. All it would have taken was 275 hours of professional development in the last three years. Between all my acting and writing classes I logged nearly 500 before I stopped counting!

This entry was posted in Acting, Oregon, Status and tagged all, teachers. Bookmark the permalink.