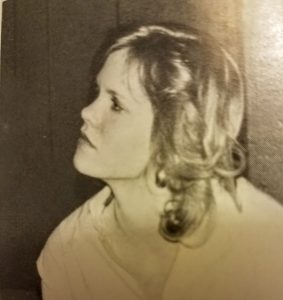 Yearbook photo of me in a high school play

When I was seventeen, a cute singer from my peer group asked me to play the piano for him.  I had never accompanied anyone before but I wanted to please him so I said yes.  He handed me piles of Barry Manilow and other uplifting songs of the era and encouraged me, saying, “You can play the piano!” It was all a little beyond me.  By the time we were scheduled to perform at one of the clubs in our hometown I was a bundle of nerves.

By “club” I mean of course the Elks Club. We were teenagers, after all. Our audience consisted of elderly people sitting around tables who wanted a bit of light entertainment at their monthly meeting. But in my state of mind we might as well have been on stage at the Met.  On our second song I flubbed the final key change and froze.  My singer friend tried to get me to continue but I would not, could not go on.  He finally had to boot me from the piano bench and sit down at the keys himself. I stood in the middle of the room staring wide-eyed at the audience while he did both our jobs. It was a while before I realized I could move my feet.  I slunk home and never told anyone the story.  My relationship with the piano was over. 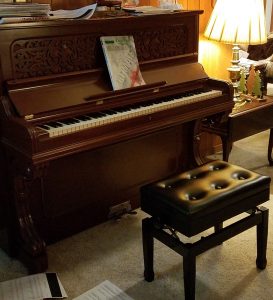 I happen to be living in a house with an old Weber upright piano. It’s a lovely walnutty thing with carved curlicue wood over the harp. One day last year its black and white keys started to call my name and even taunt me. Startled, I cried, “No! I will have nothing to do with you!” But the piano demon would not leave me alone. I realized not to answer this was to allow this evil thing from my past to defeat me. So I ran to the downtown Portland library and dug through the archives until I found the Manilow song I had blown so long ago. It was “I Write the Songs”.

I came home and set it on the piano. Most of the notes looked completely foreign after so many years of resistance. But I found myself pounding away, screwing up horribly of course, but determined to play the stupid song all the way through without stopping even if every note I hit was wrong.  And most of them were. But not all.  And I didn’t stop.

After some months of practicing I met up again with my old singer friend and told him how ashamed I had felt on that day.  Eventually he remembered the gig and asked, “Why didn’t you start playing again?”

I said, “Because, I already wrecked it. It wasn’t perfect.”

He thought about that and smiled. “I know a place where you can play,” he said. “You can make mistakes there and you can even stop. All the people there will still applaud.”

Last summer I showed up on his church doorstep wearing my lucky tangerine dress and shaking with the old terror.  As I sat down at the keys and began to play “Jesu, Joy of Man’s Desiring” for the elderly crowd, my friend sat down near me and started humming along.  At first I was thrown, then I was irritated, and finally I realized he was trying to encourage me.  He wasn’t listening for wrong notes.  He was listening for right ones.

He had my back.

Sometime after this, I went to watch the auditions of Susan Boyle who blew everyone away in her Britain’s Got Talent performance of “I Dreamed a Dream”. Most people have watched the dramatic video where the judges discount her before she even opens her mouth. But this is the one where she wins the semifinals. Watch the beginning of her performance then skip to the end to hear the response of those same judges: https://www.youtube.com/watch?v=JLSqUqmwvEE. 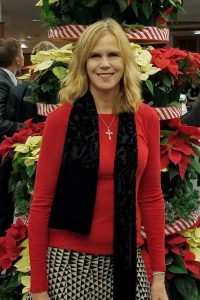 Her voice broke when she started the song but no one said a word about it. The difference was that this time they were rooting for her.  Susan Boyle won the competition and is now a world-wide name. Her elegance, talents and story were an inspiration in a world quick to embrace divisiveness. This shows that any situation can be turned around, any mistake you make can be redeemed. Not everyone out there is a critic.

Some people do have your back.

This entry was posted in Self Identity and tagged all, musicians. Bookmark the permalink.