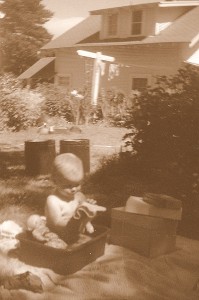 At age one, West Linn, OR

When I was a little girl I used to sit in the fields above my house on a hill and hide in the tall grass.

I would tramp it down and make a little room for myself. Sometimes I would tromp a hallway through the grass to another room and another until I had a little house.

There I would sit in one of the rooms where no one could see me and gaze down upon the little Oregon town in which I lived.

Artists have vivid imaginations and I am no exception. Mine is big and broad and never ending. It is filled with watery mists and parched deserts (in the same locale), forests and sky (in reverse order), fairies that flitter and kittens that talk. At night I dream of crazily built houses which contain hidden passageways to secret forgotten rooms. Usually they are filled with old furniture and spilled food. 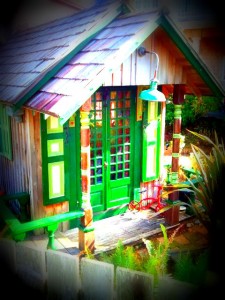 As a child I lived 90% of my life in a fantasy world.  I could stare at the wall all day and not move and be perfectly entertained. When things went wrong, I would fix the flawed world in my head and make things turn out differently to make myself feel better. But early on I realized that no one else around me used that method of escape so I hid my gift from the world in shame and fear.  After all, I didn’t want people to think I was crazy.  I have since learned that fantasy is a “coping mechanism” and that artists are “sensitive”. Also, I was doing something called “self-soothing”. These are all good things.

Because artists are sensitive it is easy for us to develop psychological blocks which make it difficult to express ourselves and be what we were truly meant to be. Some of us tend to look too much to others for approval.  This can cripple us further. As a child I never thought of myself as an artist or at least not a very good one. Now I know I was born one.  As I have begun to live a more open life I am starting to unlock the doors to my secret rooms and invite people inside. 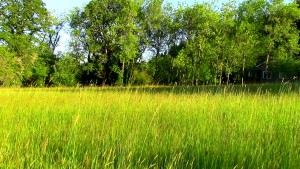 Acting and writing have been very healing to me. The worst things that happened to me as a child have become storytelling fodder. As an actor, my most shameful memories now have become standup routines. More and more, my memories do not hurt me anymore because I no longer relive them. I just use the events to tell more stories.  The more I delve, the more I discover secrets that need to be uncovered. The old furniture needs to be replaced and the food swept up.

Now I’m entering into a new phase. A slightly scary phase.  We will see what happens next. I hope I can be strong and become the person God means me to be. Yet I know I’m already who he made me–disarmingly frank and yet somehow delicate.  I am a fortunate woman to be who I am.

I hope you too can embrace who you are and know that there is nothing wrong with you. God made you unusual for a reason.

After all, He is an artist too.

This entry was posted in Acting, Oregon, Self Identity, Writing and tagged all, identity. Bookmark the permalink.