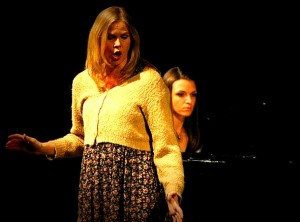 Singing “Patterns” from “Baby” at a Faculty Recital in Ontario, Oregon. At the piano: Kate Larson

Last spring I lost my voice.

This was a true disaster.

In two days I was due to travel to New York to begin study with a world famous voice teacher. Money had been spent and the tickets and hotel booked. Right next to Carnegie Hall.

In desperation I scampered to the doctor down the street from where I live just south of Portland. “Give me the good drugs!” I whispered helplessly. He laughed and prescribed everything I had ever thought of trying and one thing I hadn’t:  Five tiny miracle pills called steroids. Who knew? By day three I could croak, and that was the day I began my study with the amazing Catherine Fitzmaurice.

Catherine’s philosophy of voice training is different from any other teacher I have ever encountered. Breathing and relaxation are important, but her students do not lie passively on the ground and will these states to arrive. Instead, she has developed a more active method of relaxation she calls “tremoring.” Simply put, the actor moves into a variety of positions and lets the body shake. We also make a lot of noise. Sometimes we recite Shakespeare. Sometimes we sing. If you’ve ever been to a charismatic church service, you get the idea–It looks like everyone is filled with the spirit and speaking in tongues. 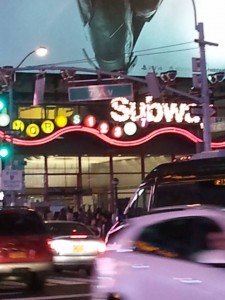 On the town after a day with Catherine

Something holy was going on for sure. I have a nice singing voice, but I’ve never thought of myself as someone who has the “money” notes. You know, the high notes they pay the big bucks to singers on Broadway. But Catherine has a unique philosophy about voice support. Like most voice teachers, she talks about the intercostal muscles and the diaphragm, but refutes the longstanding Linklater idea that the breath comes from the belly. “Your lungs are not in the belly!” she would cry and show us videos of diapered toddlers whose voices could be heard across a football stadium. She asked us to watch them engage the transverse muscles which wrap around the pelvis. These are the powerful muscles a woman uses to push out a baby.

Catherine had one day in the course which she called “Singing Day.” Joey Bates was our teacher and when my turn came, I chose “The Colors of My Life” from Barnum. Joey played the piano as I sang quietly and tearfully around what little voice I had. By then I was on day five of my miracle steroid pills. “At least,” I thought hopefully, “it sounds kind of pretty.” When I finished, Joey turned to me. “Katie, do you trust me?” he asked. I nodded. He knew I did. “Sit on the piano bench next to me,” he said, “and push against me with your back as hard as you can.” 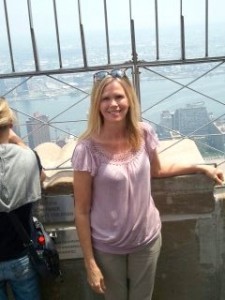 Katie at the top of the Empire State Building

I looked across the classroom over the heads of the talented teachers and college students who had come from all over the world to take this workshop. As I gazed out the open window, I put my back against Joey’s side and pushed as hard as I could.

The voice that came out of me skyrocketed across the room, out the window and practically smashed into the building across the street. The sound was hard and strong and like nothing I had ever heard come out of my body.

You would think this would have been a powerful lesson to me. But afterward, when my classmates came up to complement me, I found myself asking, “But wasn’t it ugly? It sounded ugly, didn’t it?”

They pondered this in puzzlement. “Well, no, it wasn’t ugly,” they replied.

“Well, it wasn’t ugly. It was incredible. And don’t you have laryngitis?”

After the workshop was over I returned to Portland and incorporated Catherine’s tremoring into my acting and relaxation techniques. I relished the hot summer, acted in a couple of films and spent time with friends. But I didn’t do any singing. 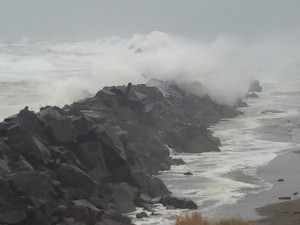 The Columbia River where it meets the Pacific Ocean

Then the darkness descended.

The winter rains hit early that year and with unusual force. By February a record had been set at 25.27 inches which is nearly twice the normal rainfall. The river rose, the yard became a jungle, and the house was as shadowy as a cave. I felt like the girl in the Ray Bradbury story “All Summer in a Day” who “looked as if she had been lost in the rain for years and the rain had washed out the blue from her eyes and the red from her mouth and the yellow from her hair.” Depression crept into the lives of many people I knew: Two marriages broke up, several of my most cherished friendships fell apart and my mother became seriously ill. Worst of all, a beloved aunt took her own life. 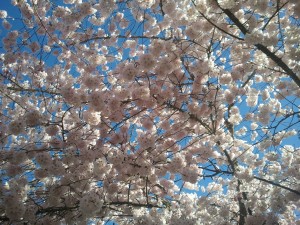 Things began to change in April when the sun arrived. Moods lifted, hard lessons were learned and singing reentered my life when an old friend asked me to help him with some special music at his church. We were in the sanctuary practicing when Mike startled me by letting his gorgeous tenor open up like nothing you’ve ever heard before. It hit the windows and the ceiling. Desperately I wanted to turn around and figure out what he was doing but I was playing the piano so I just listened as he let his voice bell out and fill the church.

Later that night, I thought about Mike’s technique and remembered “Singing Day” with Joey. I have always wished I had a voice like Judy Kuhn, Jody Benson or Paige O’Hara.* But singing isn’t always about sounding pretty any more than acting is about always looking good on screen. If you’re playing a tired alcoholic, the makeup artist is not going to give you false eyelashes. She is going to paint bags under your eyes. When you are singing in character you may choose to sound hard or angry or brassy. Resolutely I picked up the sheet music to “Moonfall”, a famously sweet soprano tune from The Mystery of Edwin Drood.  It is a song I have always told myself that I could never master. I stood in the sliding doorway which led to my bedroom and gripped the edges. I slammed both feet against one side of the frame, shoved my back against the other and pushed as hard as I could.

And I sang ugly.

I sang until my intercostal muscles ached and my diaphragm hurt and my transverse muscles pulsed.

In case you’re wondering, no miracle occurred. The sound was truly ugly. It takes time and practice to get better at something but boldness is always the first step. 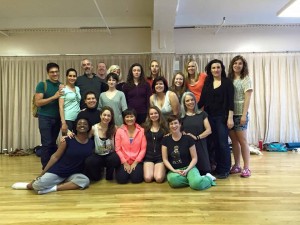 With my Fitzmaurice classmates in New York, May 2015

After a while my voice started to congeal and the lower and high ranges began to sound like one voice instead of two. Now when I sing “Moonfall” I have enough control that I can actually apply some dynamics. Soon I know I will be able to hold the last note as long as I should. I look forward to the day when I am capable of applying the final sforzando.

I now relish my ugly.

I’m even beginning to think it sounds pretty.

*In case you don’t know who these sopranos are, they are the Broadway singers who voiced Disney’s Pocahontas, Ariel and Belle.

Note: Anybody trying my “doorframe” method, make sure the frame is wide enough for your spine. An interior sliding doorway with a smooth, flat frame is best. A safe alternative is to put a heavy piece of furniture in front of you and push against it while you press your back to the wall.

This entry was posted in Acting, New York Stories, Teaching and tagged all, musicians. Bookmark the permalink.