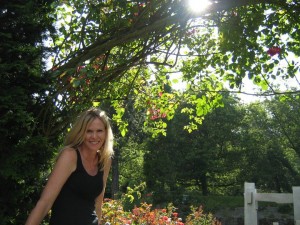 Katie at the International Test Rose Garden in Portland

Years ago when I was in a theatre in the East End of London, a young Cockney boy sitting in front of me noticed my American accent. When I answered his demand to know where I was from he said in a lilting, broken brogue, “Oregon? Is that in Manhattan?”

It used to be when I mentioned Portland, people thought I meant a city in Maine.  Not any more. It all caught up with me last spring when I was visiting Florida and some people asked me what kind of Voodoo Donuts were my favorite. I was shocked that they’d even heard of them and worse, felt a loss of respect when I told them I really liked their local Krispy Kremes.   They seemed to know all about Portland  and that’s when I realized that somewhere along the way, the small industrial city that I was born in had crossed a line and become known all the way across America.

Our coastline told in Christmas lights at the Oregon Zoo

The answer is the media.

Shows like Portlandia, Leverage, Grimm, The Librarians and Significant Mother and the locally filmed Wild have drawn national attention to us. There is a budding, flourishing wealth of people in the creative industry of storytelling in Oregon who are working together to make film, commercials, shows and theatre. The only other place in America where I have met so many talented writers, teachers and performers is New York City.  And last summer when I visited New York, no one asked me how things were going in Maine.

This reminds me, I must visit London again soon.

You can help support Oregon Film by finding out who your local state rep and senators are in your district (see https://www.oregonlegislature.gov/ and lobby to keep film incentives in place. These incentives provide tax breaks for people who choose to film here.  This promotes our visibility and brings more jobs to Oregon.

This entry was posted in Acting, Grimm Stories, New York Stories and tagged all, Oregon. Bookmark the permalink.

2 Responses to Not in Maine