On Fire at Second City 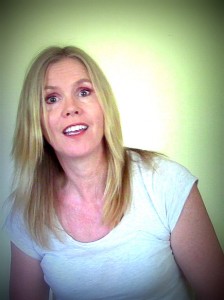 At work practicing my comedy skills

This summer I told a non-actor friend that I was to about to go take some comedy classes at the Second City Theatre in Chicago and she asked warmly, “What’s that?”

“It’s a famous theatre. You know, Gilda Radner, Tina Fey, The Cow That Started The Chicago Blaze of 1871? All these smokin’ hot actors came out of there and got hired on Saturday Night Live.”

“Oh, I’ve heard of that show,” she said, brightening. “Well, have a nice vacation.”

“I’m not going on vacation!” I simmered with indignation. “I’m going there to work.” I blew out a deep breath and tried to explain again. “It’s a truly illuminating place to study. That theatre is really on fire.” 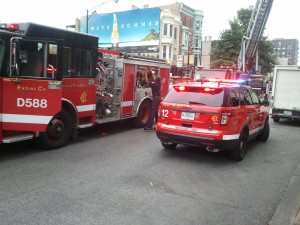 Little did I know, this would turn out to be the truth. On my third day in Chicago I was in the deMaat Theatre in Old Town trying out my scorchingly funny act in my Stand-Up Class when a Second City employee came in and quietly stated, “There’s a fire in the building. Please gather your things and calmly exit the theatre.”

Of course because it is a comedy school someone had to ask, “Is he kidding?” but I vaguely remembered from public speaking class that it is against U.S. law to yell “Fire!” in a crowded building in jest even if it is an actor who delivers the information in a whisper. So I slowly packed up my laptop and strolled out of the deMaat with the rest of my class figuring we had lots of time. Jason contemplated grabbing a cup of Our Best Roast from the Starbucks downstairs which was next to the peppery Chipotles Restaurant where we planned to have a spicy lunch. Don pondered whether to strike up some action at the restroom on the way because he had to pee like a constipated glowworm.  I talked him down, figuring we might need the water. As we entered the smoldering staircase, Sarah paused to consider whether she should stop to take a selfie next to the steaming walls. Veronica, who is the funniest phlebotomist I’ve ever met, raged at her, “Get your ass down those smoking steps or I will separate you from your infernal platelets!” Selfishly I wished that Sarah had got that selfie so I could share it on Instagram because a photo of Sarah in hell would make it worth figuring out how to use Instagram.

By the time we reached the haze on the ground floor we had feverishly picked up the pace. As we skipped through the murky lobby it hit me how few of us there were. The whole building should have been teaming with children who were in the Second City youth summer program.   The children had been whisked out of the building before they even warned the adults? Suddenly I became self-righteously indignant. Have you ever noticed that when an elderly person dies people yawn but when a baby dies people fall to pieces? Like one thing is a tragedy but the other isn’t? What makes children more important than adults? Do they pay taxes? Do they contribute anything at all to society? What’s with all those signs on cars that say “Baby On Board” and the ones on busy streets that say “Caution, Children at Play”? Like we should be careful not to hurt a child but it’s okay to mow down the grownups? And why were the Stand-Up students last? Did they think because we were already standing up this would give us a few extra seconds?   Self-importance engulfed me like flames. I’m still in my prime!  Okay, I’m past my prime, but I haven’t made my mark yet! I deserve to live as much as the babies.  I’ve still got what it takes and I’m going to get on Saturday Night Live before those kids grow up and start getting treated like I am! 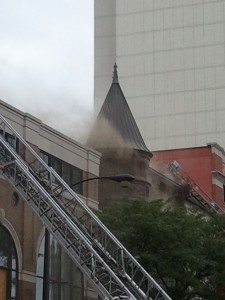 By the time we got outside we were sort of in shock and kind of just stood in front of the burning building. After a moment we remembered we should take pictures so we could share the experience with our friends on social media. As we fired up our cell phones, twelve fire engines and eight emergency vehicles screamed up to the curb and three news helicopters materialized overhead. As an elderly fireman jumped off his running board and ripped the caps off the fire hydrant right in front of me I quipped, “So, this must be…um, quite a large fire?” “Darlin’,” he drawled with a feisty wink,” I’ve seen better in my day.” He climbed up the ladder hauling the gigantic hose which was now dripping with water and continued, “Most of these newbies are here to interview those suspicious-looking cows. Look, there’s one over there across the street sulking by the Walgreens.” I turned and noted a shy brown Long Horn darting into the drugstore with a police officer in hot pursuit. The old fireman nimbly scaled the rungs and smiled for my camera while showing off his ancient colossal tube.  “Oh, dear,” I thought. “There’s not only gonna to be a hot time in Old Town, but there will be fury on the Chicago news tonight over the targeting of these cows.” 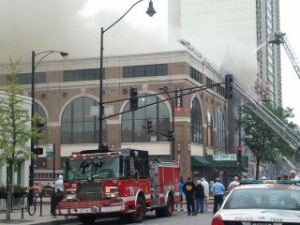 Just then an irate woman of no discernible rank or uniform started screaming at us with an air of unfathomable authority. “Get out of the way, you nits!,” she blared at us. “What is with you with your cell phone cameras, you silly twits! Let the firemen do their work!” An unaccountable sense of territorialism flared up inside me. After all, my tiny standup class wasn’t exactly a crowd plus there had been no fire alarm and we were last to come out of the building unless you count the two Hispanic employees of the Chipotle Restaurant who hadn’t been told about the fire at all. They had magically appeared next to us like lightning only when they noticed the fire engines. And their restaurant was right by the front door.

“It’s MY fire!” I seethed at the woman. “It’s MY burning building! I was just in MY smoking stairway moments ago and the only alarm given to me in the midst of the inferno was by the straight man in some comedy routine!” Only I didn’t express my outraged sense of ownership out loud because the woman was dressed in black and possibly some kind of theatre person. I was afraid she might work for Second City and I didn’t want to get booted out of the school. Wait a minute, I realized, I’d already been booted out of school. 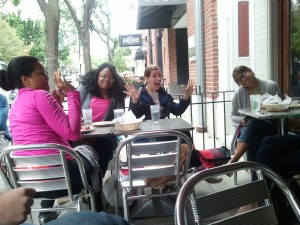 So I went to have a cup of tea with my Comedy Sketch Writing classmates and started posting to Facebook completely ignoring Alex, a nice student sitting across from me who had come all the way from Germany to study in America in person and be in community with nice theatre people like me. He helped me discover that Second City had posted a photo on Twitter but not on Facebook so I thought I’d make a subtle joke about competing websites and linked the photo from Twitter to Facebook.   Understand that when I post a leggy picture of myself with my blonde hair shining in the sun I get at least 30 Likes inside of ten minutes. But here I am in a blazing extra-alarm fire which takes down half of a historic building at a famous theatre school and I get…um, no Likes? After an achingly long fifteen minutes my cousin Jane finally throws me a bone, “I don’t use Twitter.” 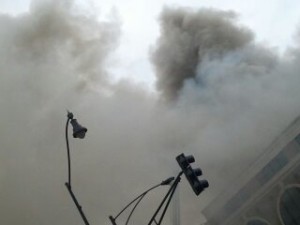 Second City is really big on us knowing our audience and clearly establishing our Given Circumstances so I figured I’d been too subtle. My Twitter joke just wasn’t going to be understood by the Facebook Crowd. So I went online and found a news article with a picture of the fire and properly posted it along with my Who What and Where with lots of pictures the news couldn’t possibly have gotten. I changed the name of my photo album to “YES…I WAS IN A FIRE AT SECOND CITY AND…?” After another five minutes my friend Shirley replied saying, “Have a nice time, see you when you get back!”  It dawned on me that no one ever reads articles on Facebook.  Including me. 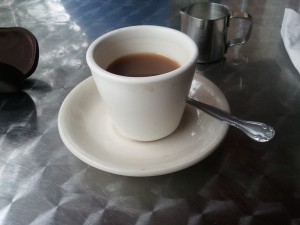 At least my friends at Second City know we made a smoking hot exit.

Disclaimer: This post was written in the style of standup and includes the following comedy elements: the rule of three, a rant, double entendre, mockery, a reversal, exaggeration, sarcasm, word play and political satire.

This entry was posted in Places, Status, Writing and tagged actors, all. Bookmark the permalink.