Death in a Blue Spotlight 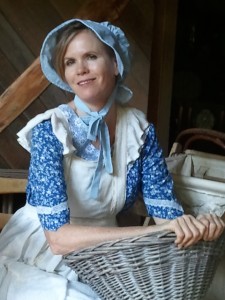 In pioneer garb at a recent Living History event in Rhododendron, Oregon – photo by Carly Mayberry

Once a long time ago I was cast in a really bad musical.

The story was one of quirky Americana about the Wild West. I played a pioneer girl who didn’t get the guy, sang two solos and got stabbed to death protecting the hero during a knife fight.  The show had clever lyrics and the music was syncopated with difficult intervals reminiscent of famed composer Stephen Sondheim.  At my audition, the song the composer handed me to sing was properly scored and he seemed organized despite the fact that the show only had a two week rehearsal period.  We were due to give one performance at a well-respected festival and I was the last to be cast, so I assumed the other actors were on their game and professional. However, after a few rehearsals I realized the composer had written out the music to only one song and had been teaching the rest of the music to the cast by ear. Most of them couldn’t sing or even carry a tune.

“Jerry,” I whispered to the pianist after a week, “I don’t think I can do this. I think I have to quit.”

“You can’t quit,” he joked back feebly, “We’re halfway through the rehearsal process.”

“It’s only been a week,” I whined defensively, “and what if somebody actually comes and SEES this?”

“I know,” he pleaded fearfully, “but if you quit I’ll have to quit so please don’t quit.”

During the performance, I found myself backstage bringing scenery on and taking it off since no one had been assigned to do that. I found myself giving actors cues because no one seemed to know when to enter or exit. During the final knife fight, the villain completely misjudged 32 measures of music and stabbed me upstage left behind the piano. As I held the rubber knife against my body which I had fought for in rehearsals (the other actors had seen no problem with using a real one), I pondered the blue light down by the audience where I was supposed to be. It seemed very far away to someone who was supposed to have a knife in her chest. But the villain had no concept of what it meant to get to places “in character” and it was he who dragged me bumblingly into the spotlight. My red face must have been purple in the light as I sang my final solo and collapsed to my death in relief.  To my horror the audience clapped. A lot. 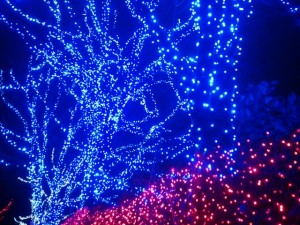 Blue lights at the Portland Zoo – photo by Katie Bennett

After the bows it was even worse because my fellow actors all congratulated themselves on what a wonderful job they had done and included me in their praise, saying “Good job” as they went off with their friends.  I had only one friend in the audience because I had sent out all my show invites that morning so that everyone would know I was in a play but no one would be able to come.  After the theatre emptied, my friend came down from where she had been waiting in the audience. She was not a theatre professional but she was a member of the audience and as far as I was concerned, that was all that mattered.  “You know,” she said quietly, “you told me it would be bad…but that was really BAD.”

It was such a relief to hear.

This entry was posted in Self Identity and tagged actors, all. Bookmark the permalink.

2 Responses to Death in a Blue Spotlight