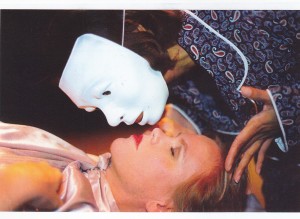 As Sleeping Beauty in an in-house grad project I directed us in at the University of South Carolina. w/ Pilar Herrera.

A Big Life:  Encouraging Words for Those in the Entertainment Industry –

Once I had a summer fling with a beautiful, intelligent man.

While we were together we had some major differences and I pondered hard whether I really wanted this.  We were both due to be in separate cities for a while but I didn’t worry about that. I was good at letter writing and on the phone.  I was good at distance.  It was such a relief when he was gone to pick up my pen and write flowery missives, pretending he was something that he was not.  When I wrote my letters it was to a fantasy person.  I can only imagine my lover read these letters and did not feel that he was truly seen.

When I was a young actress, I treated “the career” like that. The career was a lover with whom I felt comfortable at a distance. I went to lots of big fancy auditions and left feeling rejected. I said no to offers that sounded small, ordinary and pedestrian.  I didn’t know how to be personable and was disconnected from any artistic community which had real respect for me. So I dreamed I magically would be swept off my feet without having to do much of anything.

These days I try not to pretend the career is something it is not. Life can be ordinary and pedestrian. In fact, a lot of creating art is just that: You write a play and you do it with friends. You want to act so you study until you get better. You don’t try to dream it into reality in some cock-eyed way.  The “career” is a different entity from what we would like it to be.  The temptation is to fling ourselves at it relentlessly without regard for its true nature…or to run away all together.  Both are ways of avoiding becoming closer.

As Mom in a recent test commercial with Studio 3 in Portland, Oregon. w/ Lana Sage.

As you can probably guess, my summer boyfriend and I broke up. “Breaking up” with the career for a while is something I did too. For me, just being a teacher and focusing on the work of being an artist without being out in the professional game has given me a greater love for the “real thing”. Getting back together with the career has been scary too…unexpectedly so.  That is probably why I sabotaged myself so much in my youth. Fear of success is every bit as real as fear of failure.  It is very scary to do the hard work of becoming closer.

Just as it is with a lover.

This entry was posted in Acting, Self Identity, Teaching and tagged actors, all. Bookmark the permalink.