The Cameraman in the Closet 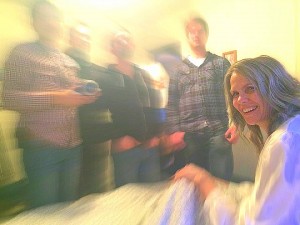 As Tommy on the set of the film Tomorrow which premieres June 20 at Cinema 21 in Portland, Oregon

A Big Life:  Encouraging Words for Those in the Entertainment Industry –

“The closeted people are ready!”

It was the end of a long night shooting a bedroom scene. The camera guys were shut tight inside a tiny closet. One of them held the boom and the clothes out of the way while the other one pointed his camera at the door. My job was to get out of bed, open the door, turn on the light and retrieve the suitcase jammed between the cameraman’s legs.

The small slate is used in tight spaces.

Film actors often say their first love is the arc of being in a live play. They love the continuity and the fact that they can take the journey of the character in the order that it occurs.  Maybe it’s because I’ve spent so many years in the theatre, but I often prefer the high tech feeling of being on a film set.  One would think an actor as claustrophobic as I am would hate being the “talent” in a small room crammed with 15 people attending mainly to their cameras and equipment.  But I love being a cog in the wheel.

In a sense it is true that I am a piece of their equipment. However, have you seen the cameras they make these days? They are works of art.  Thinking of myself as a talented part of the whole takes the pressure off.  It helps me stay relaxed, which anyone will tell you is key to being a great actor.  None of the training, thinking or studying I do in preparation for performing will help me be emotionally engaging onscreen without that ability.

So if you ever find yourself opening the closet door to someone holding a microphone or climb under the covers while ten men in your bedroom check out the lighting, make sure you let loose and laugh hard.

That’s the kind of thing that makes for a good day’s filming. 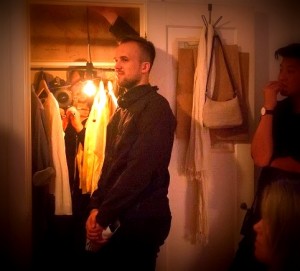 Inside the bedroom closet on the set of Tomorrow

Will Tommy the lunch lady take her life back into her own hands?

This entry was posted in Directing, Photographers, Status and tagged actors, all. Bookmark the permalink.

1 Response to The Cameraman in the Closet