The Star and the Coward 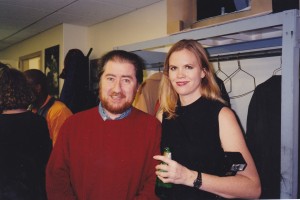 Backstage at STC schmoozing with Joe Dowling, the artistic director of the Guthrie Theatre

The year before I went to act at the Shakespeare Theatre Company* in Washington, D.C., I caught one of their productions which featured a beautiful and well known film actress I will call the Star.  My friends in the show each had something to say about her: She was unpredictable, tempestuous, troubled and passionate. What I discovered later is that she is also funny.

My assigned host was a wild and sexy dark-eyed actor in the cast known for breaking hearts wherever he went.  Dark Eyes was married but from the way he was flirting with me, I wasn’t surprised to hear that we were giving a ride to a pretty woman after the show. As the three of us hurried out the stage door, she sped ahead impatiently shouting, “Come on, Come on–hurry!” Suddenly she stopped in her tracks and turned to me laughingly declaring, “I know–I’m such a bitch.” It was the Star.  All I could think of to say was, “I heard that about you.”

Okay, I didn’t say it out loud.

“You should have!” cried one of my friends in the cast upon hearing this. “She would have loved it–you probably would have become her best friend for life.” Pondering that, I decided the Star would at least have had more fun if had chosen to spar with her.  After all, she was an actress in the show just like anyone else. Instead I cast my eyes downward in the face of her fame and mumbled something innocuous.  Oh, what a coward!

At the time I wasn’t really what talent agent Damon Jones of Portland’s Actors in Action calls a “people person.”   The successful actor needs to be friendly and confident.  It’s important to meet people where they are. But how do you become a “people person” if you’re not one? 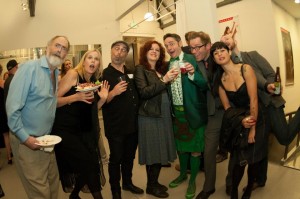 Partying it up with Portland’s finest at the Oregon Actor Awards in October 2014. Photo by Melody Saunders.

Becoming a people person is a very giving thing to do. These past two years in Portland when I sit down to count, I find that I have been involved with at least twenty different organizations.  That’s a lot of parties, folks! Here’s my latest secret: When I’m at an event where I don’t know anyone, it can be nerve-racking. What I do is go stand with a group of people who are pleasantly chatting and act like I belong with them.  When they get around to asking who I am, I tell them the truth: “I didn’t know anyone here and you looked friendly.”  They always laugh and say, “Well, you know us now!”

And by then I do.
______
*The Shakespeare Theatre Company (STC) won the Tony in 2012 and has won more Helen Hayes Awards than any other theatre.  STC is sometimes referred to lovingly as “the Folger” because they used to perform at the Folger Shakespeare Library.

This entry was posted in Directing, Places, Self Identity, Status and tagged actors, all. Bookmark the permalink.

3 Responses to The Star and the Coward