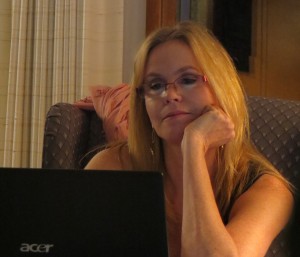 My latest role: The playwright at work.

When I was a little girl, I spent a lot of time watching television.  In my fantasies, I always made up a girl hero and inserted her into the story. At age eleven, I was obsessed by the television show Batman, for which I invented the character of super hero Trish. Her valiant cat Tussy was named after a pot of lip gloss I owned.  Trish and her cat wore matching outfits with capes in shades of baby pink and green.  Other forms of my fantasy girl rescuer found her way into shows like Star Trek and Flipper, which was a show set in Florida about a helpful dolphin. In these shows the men–or the fish–bravely fought off intergalactic tyrants and rescued people from drowning or poisoning the glades.  My girl hero did the same and all the boys were in love with her. 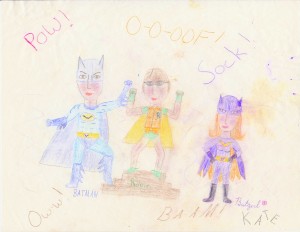 Obsessed with Batman at age 11

As a child, I would never have dreamed of admitting to having such intimate fantasies. My inner life was a form of escapism and intensely private. In fact, it wasn’t until recently that I admitted to having a current girl pirate fantasy. When I confessed it, I suddenly realized I had an elaborate plot. It was comical and had fights in it which would be beneficial to the stunt women I know who are in my Society of American Fight Directors circle. 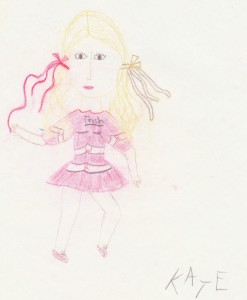 My Batman super girl hero Trish in disguise as her alter ego, a high school cheerleader.

Within the gentle encouragement of four different writing groups over the past two years, In Search of the Red Skull has come to life.  It had its first public staged reading at the Fertile Ground Theatre Festival in Portland, Oregon on Sunday, January 25, 2015. This theatre festival boasts 100 new works every January. With my co-producing group, PDX Playwrights, I produced and directed it at the Hipbone Theatre with a cast of Portland’s best actors, all in high demand and incredibly talented.  The beautiful actress Rosalind Fell played my heroine Emmeline who loves sword play and is the catalyst who sets the play in motion.  The men in the play are men, virile, heroic, funny and dastardly. But the women are strong, fearless and just as good at rescuing as the men. 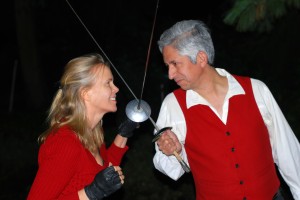 As the pirate Red Hart crossing swords with her enemy Alexander Falcon played by David Loftus in “In Search of The Red Skull”, my two act comedy.

My mission statement for the theatre has recently become this:  I want to change the world in a “sweet and subtle” way. Rather than complain about the inequality in the world, with this play I simply wanted to create an adventurous comedy romp where there was an equal ratio of women to men. I wanted a diverse cast and a decent age spread among the characters. I got close.  Best of all, I was on the stage myself. I portrayed a fierce girl anti-hero I penned for myself–an angry world-weary beauty known as the pirate Captain Red.  Who would have thought I would be brave enough to play out my girl hero fantasy in public? But I am no longer afraid to be vulnerable in admitting to my private life—in fact, I have become brazen. Refusing to be ashamed has resulted in a well-received play.  All the laughter and tears were in the right places so what could be better than that?

This entry was posted in Acting, Art, Directing, Self Identity and tagged all, writers. Bookmark the permalink.

7 Responses to My Girl Super Hero