Uncovering My Bottom Half 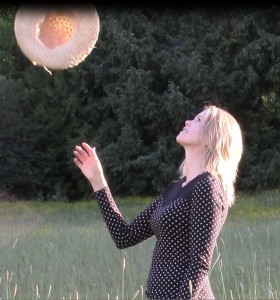 Me toying with my headspace in the Portland sun

Remember: there are no small parts, only small actors. – Constantin Stanislavski

“All right, take off your clothes and…Background! Action!”

We were doing a scene by the “swimming pool” on ABC’s All My Children back in my early days as a younger actress. I’d thought they were kidding when they’d asked me to bring a bathing suit to the studio.  But I was a recurring extra and U5 performer who worked regularly on the show, so I grudgingly put on my suit and slunk to the back of the set.  The director found me there hiding behind other extras, my bottom half wrapped in a rainbow-striped sarong. He guided me out of the crowd, pulled off my wrap and plopped me into a deck chair in the foreground. 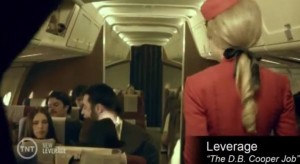 My lovely friend Marie Welsh as an extra in Portland’s Leverage. She’s just above the TNT Logo. Extras Only Casting by Sally Gates.

Oh, gosh, I thought, when this initial moment of horror had passed, I must be better looking than I think.

When I was new to New York, I did a lot of extra work. It was fun and I met a lot of people that way. Yet some folks would say to me, “It’s “not real acting work” and “they’ll never think of you for principal work if you’re an extra”.   Don’t believe it. The adage “Work leads to more work” is true. I got small speaking parts frequently on All My Children as a result of saying “Yes” to being an extra.  Other opportunities came my way as well (see my post, A Little Bit of Soap and the Secret to a Good Headshot). 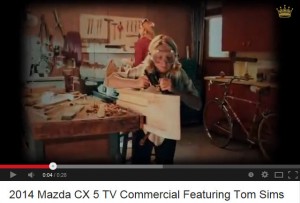 Me as an extra in red on a recent national Mazda shoot. Director Jeff Zwart and producer Susan Sullivan do great work.

It is true that there can be an element of “low status” associated with being an extra.  It depends on the show.  No one ever treated me that way on AMC, not even on the day the director uncovered my “bottom half”. But year after year of watching the principal actors do what you want to be doing can mess with your “top half”– and by that I mean your head space.   Here is the especially dangerous part: It is very tempting to complain or criticize the work of a performer who has a role you think you could play better.  Even if you don’t complain out loud, an inward attitude of bitterness and judgment will wreak havoc with your success at auditions. Being an actor is highly psychological.  We always have to keep our minds on being good actors, not on our perception of “who” we are–or who we “aren’t”. 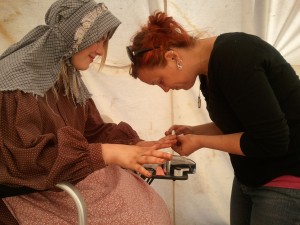 Kristine Heimdal is one of the extras I recruited for a shoot for the National Parks Service. Eva Lohse was the local makeup artist for Leverage and now The Librarians…she also did my makeup for the Mazda shoot.

Extra work can be very rewarding. It can even be good for your ego, especially if the director decides to pull you out of the crowd and uncover your bottom half.

Just make sure you guard your top.

This entry was posted in Extras, Status and tagged all, New York. Bookmark the permalink.