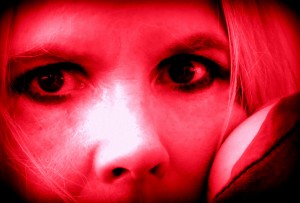 As babystealer Captain Red in my upcoming original play “In Search of the Red Skull Jan 25 at 1:00 at the Hipbone Studio

HARPER: It’s good to be back on The Night Hawk, eh, Captain?
FALCON: Aye, it is. What do you see, Harper?
HARPER: Naught but waves and open sea.
FALCON: We’re coming upon the reefs soon, I wager.[1]

Why do we like pirates so? Is it the sense of adventure, the hope for treasure, the willingness to fight and never surrender? Is it the never ending travel, the love of the ocean and the mystery of its denizens? Is it the clothes, the piratical speech, the comradery, the swashbuckling with swords and antique pistols?

Or is it just about breaking the rules?

Of course, I am talking about the fun, good-hearted pirate of popular lore like the Pirate King in The Pirates of Penzance or Morgan in the film Cutthroat Island.  Or Jack Sparrow in The Pirates of the Caribbean.

Not the Somalian kind.

Pirates are not conventional.  A pirate is free.  If I’m a pirate I can find my own way to the treasure and not follow the map other people want to thrust at me. Of course I also have to watch my desire to push my own map at others.  This is a special danger to people in the entertainment industry.  Artists cannot control the future and there is so much waiting around for jobs. That anxiety can cause us try to control people and situations or make us more susceptible to being manipulated. But that puts our boats on a course headed straight for the reefs.

That’s not the kind of pirate I want to be.

We don’t know the future, especially when it comes to a career in the arts.   It’s hard to keep a light hand on the helm, letting the boat go freely on the waves.     It’s hard to let other people just be who they are.

But it’s a fight worthy of rapier and dagger. 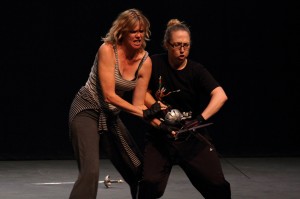 Me on the left in a rapier and dagger fight with Tori Rough Jansson at a Society of American Fight Directors Workshop. Photo by Craig Lawrence

[1] In Search of the Red Skull is a new play by yours truly, Captain Katie Bennett. It will be having a staged reading through PDX Playwrights Sunday, January 25 at 1:00 p.m. at the Hipbone Studio in Portland, Oregon. It is part of the Fertile Ground Theatre.

Tickets can be purchased at http://fertilegroundpdx.org/staged-readings.html

This entry was posted in Directing, Oregon and tagged all, writers. Bookmark the permalink.