A Polka Dot Bikini and the Kindness of Strangers 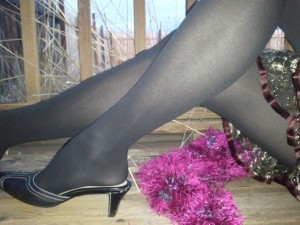 When I was in my early 20’s I went to visit my friend Michael in Miami Beach for a month. I also wanted to get an audition for Miami Vice–which I did, but that’s another story.  My first day, I figured since nobody knew me at the hotel pool, I’d try out my new Bill Blass black and white polka dot bandeau bikini. 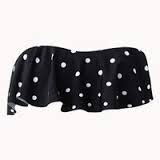 Looking down from the pink and aqua diving board in my skimpy ruffles, I noticed a group of retired New Yorkers observing me from their lounge chairs.  Their bodies were round and their smiling faces were crinkled and dark from the sun.  They made me think of walnuts.  One large woman shouted up at me cheerfully in a Brooklyn accent, “He-ey, lady!  I want your figurah!”

The kindness of these strangers has stuck with me.

The entertainment business is filled with negative commentary aimed at people’s insecurities.   I once went to see a talent agent who told me it was a shame I had brown eyes instead of blue ones.  A modeling agent once told me I had the wrong nose.  An acting teacher told me another time that I didn’t have what it took to “make it.”  And after all of those things happened, I went on to book print and television jobs.

We must guard our confidence. 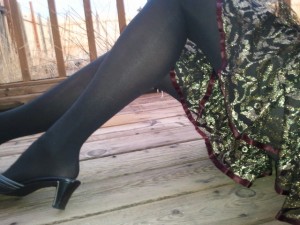 These days I choose to celebrate myself.  It helps that I’ve been on the planet long enough to watch changes in trends.  I can remember when the ideal lips were a bit smaller and the ideal eyes were bigger.  Cellulite was not invented until 1981.  No one talked about it before then.  Because I’ve been around to watch the fashion shifts, I refuse to believe in them.  I  wear what I want, much to the dismay of people who think I should wear blazers
and toss my short skirts.

But every once in a while, this positive attitude slips.  I still like to swim, and sometimes it’s hard to walk by those annoyingly cute young lifeguards who wear so little so well.   One day recently at the community pool, these irritating Baywatch wannabes even let the Senior Water Aerobics Class into the pool before lap swim was up.  One old woman began to do her power walk across all seven lanes, including mine. She bashed into me. Two ladies, one with a shape like a withered carrot and the other with a shape like a withered potato,  stood in my lane, talking.  I kept brushing them as I went by. All of this warred with my compassion for the elderly.  But as I paused in my swim, the carrot stopped me with a sparkle in her eye and indicated the potato.  “We’ve been talking and we were wondering,” she said, “If we started doing lap swimming like you’re doing, do you think we’d get to look like you?” 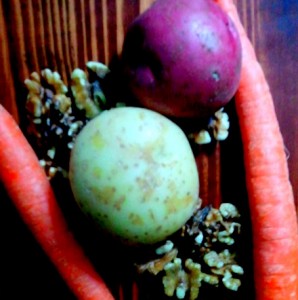 I know that in time I will have the figure of either a withered carrot or a withered potato.  There is nothing I can do about it and it’s not that terrible. After all, as an actor, I will be still be castable (just reread the story above). More importantly, I hope that I will not feel envy or dismay at the beauty of younger people, but celebrate it, as well as what is left of my own.

I also plan to keep rocking my miniskirt until the day I die.

This entry was posted in Acting, Agents, Designers, Models, Self Identity and tagged all, body. Bookmark the permalink.