You are Memorable (On Agents: Part 1) 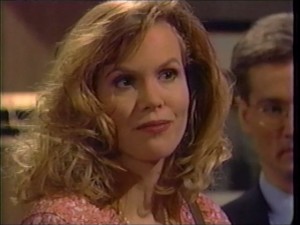 Katie as Tiffany Slovinsky on As the World Turns, NBC (click on the photo to see a clip from the show)

It is easy to think, in a profession where so many people are striving, that we are not noticed.

That isn’t necessarily so.

When I was an actress in New York–older than I was when I was complaining to my Dad (see the previous blog post) but considerably younger than I am now–I once went to meet a potential new agent who was interested in freelancing some actors for soaps.   It was an especially good agency with a fine reputation. Due to a subway mishap, I blew into the Saturday interview barely on time.  As I ran into the building I caught a glimpse of myself in the mirrors in the lobby in horror. I was terribly windblown.

I had no time to dig for a comb.  There the agents were, opening the door in welcome to me, warmly smiling. The actress scheduled to be interviewed after me was already there, waiting to be seen next. She was the exact opposite of me—petite, brunette and perfectly coiffed without a hair out of place. She wore a smart mini skirt and high heels. I was hopelessly tall, awkward and my blonde hair perfectly disheveled. I wore a flowing sundress over a smart tee shirt and flats.

The agents never called me after the interview.  Time passed and I had almost given up when I got a call from one of them, Peter. I could hear the grin in his voice over the phone when he said, “I’ll bet you think we forgot all about you.”  It had been nine months. As I pondered that, he told me kindly that there hadn’t been any soap auditions that they felt I was right for until now.  “You,” he said, referring to the Saturday interview, “of all the people we met were the person we liked the best that day.”  He then sent me out to audition for two soaps within two weeks, and I booked a great character role on As the World Turns.

Years later, I often told this story to my college theatre students.  They didn’t always understand that when I didn’t put them in a show, it didn’t mean I wasn’t thinking of them. There are only so many parts and so many people and so many shows. There are actors whom I didn’t cast at their first auditions for shows whom I called months or years later to play wonderful leads in shows such as Romeo & Juliet or The Diary of Anne Frank.

It is easy to assume we are forgettable, just one of the crowd. Or that we blew it somehow at an audition or the people we meet don’t like us.   After auditions and interviews we all have the choice to tell ourselves “They think I’m awful” or “They think I’m wonderful and never will forget me”. Since I have no way of knowing, I choose the latter.  I find it more productive. It makes me feel better.

And I find often it is absolutely true.

Please click on this link for “You are Memorable (On Agents: Part 2)“
This entry was posted in Acting, New York Stories, Self Identity, Teaching and tagged agents, all. Bookmark the permalink.

1 Response to You are Memorable (On Agents: Part 1)