Me at the Winter Wonderland Film Stunt Workshop, Chicago 2013

A Big Life: Encouragement for People in the Arts –
Recently for the first time in my life I found myself on unemployment.

This had never happened to me before.

Many people would be discouraged, but I relished the time.  I hadn’t much time in my previous job, which was running a theatre department at a small college.

So. I wrote a full length play and took workshops in stage combat.  I went to a film stunt class and threw myself down a flight of stairs.   And I spent a fair amount of time searching for work and trying to reconnect myself to Portland, Oregon, the city of my birth.

I tried to keep my life big.

Then I began to relax.  The directing job had been wonderful, but it had also been exhausting.   As my toes started to uncurl, I thought, “This is nice. Why strive? Why try so hard?  This line of work is stressful.  I’d rather clean houses. No stress, no pressure, no conflict and no competition.  No taking my job home with me.” Most importantly I thought, “If I give up these crazy theatre dreams, I won’t ever have to be afraid again.”

As I stopped doing so many things, my life became small. Then I began to watch people in my life.  I noticed that both older and younger people are afraid of basic things like paying the bills or calling the handyman. At the beginning of their lives they haven’t done these things yet—and at the end those things become the only things left to do.

The highly quotable Anne Voskamp in her book One Thousand Gifts talks about fear.   My favorite quote is this: “Fear keeps a life small.” 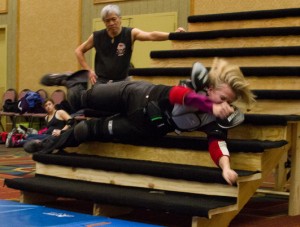 Throwing myself from the top of the staircase with Julliard’s Fight Choreographer Michael Chin looking on.

I realize now that there is no way to run from fear. Fear will find me. However small the smallest conflict in my life, it will become my biggest fear.  So I’d rather be scared over going to an audition or trying to shop my play.  We’re always going to be afraid of something.  So why not be afraid over the truly “big” things that matter?

This entry was posted in Acting, Oregon, Self Identity, Teaching, Writing and tagged all, anxiety. Bookmark the permalink.

3 Responses to A Small Life